Jane Marple, usually known as Miss Marple, is appearing in twelve of Agatha Christie's crime novels. Miss Marple is an elderly spinster who acts as an amateur detective and lives in the village of St. Mary Mead. She has been portrayed numerous times on screen and is one of the most famous of Christie's creations. Her first published appearance was in issue 350 of The Royal Magazine for December 1927 with the first printing of the short story The Tuesday Night Club which later became the first chapter of The Thirteen Problems (1932). Her first appearance in a full-length novel was in The Murder at the Vicarage in 1930.

Miss Jane Marple is an elderly lady who lives in the little English village of St. Mary Mead. She looks like an ordinary old lady, dressed neatly in tweed and is frequently seen knitting or pulling weeds in her garden. Miss Marple sometimes comes across as confused or "fluffy", but when it comes to solving mysteries, she has a sharp logical mind, and an almost unmatched understanding of human nature with all its weaknesses, strengths, quirks and foibles. In the detective story tradition, she often embarrasses the local "professional" police by solving mysteries that have them stumped.

The name Miss Marple was derived from the name of the railway station in Marple, on the Manchester to Sheffield Hope Valley line, at which Agatha Christie was once delayed long enough to have actually noticed the sign.

The character of Jane Marple in the first Miss Marple book, The Murder at the Vicarage, is markedly different from how she appears in later books. This early version of Miss Marple is a gleeful gossip and not an especially nice woman. The citizens of St. Mary Mead like her but are often tired by her nosy nature and how she seems to expect the worst of everyone. In later books, she becomes more modern and a kinder person.

Miss Marple never married and has no close living relatives. Vicarage introduced Miss Marple's nephew, the "well-known author" Raymond West. His wife Joan (initially called Joyce), a modern artist, was introduced in 1933 in The Thirteen Problems. Raymond tends to be overconfident in himself and underestimates Miss Marple's mental powers. She has a niece called Mabel Denman, who doesn't appear to be a sister of Raymond's. Mabel appears in the short story The Thumb Mark of St. Peter. Miss Marple has at least one goddaughter, Diana Harmon, who lives in Chipping Cleghorn. Miss Marple stayed with her in A Murder is Announced. In her later years, Miss Marple has a live-in companion named Cherry Baker, who was first introduced in The Mirror Crack'd from Side to Side.

Miss Marple is able to solve difficult crimes not only because of her shrewd intelligence but because St. Mary Mead, over her lifetime, has given her seemingly infinite examples of the negative side of human nature. No crime can arise without reminding Miss Marple of some parallel incident in the history of her time. Miss Marple's acquaintances are sometimes bored by her frequent analogies to people and events from St. Mary Mead, but these analogies often lead Miss Marple to a deeper realization about the true nature of a crime.

This education, history, and experience are hinted at in the Margaret Rutherford films, in which Miss Marple mentions her awards at marksmanship and fencing (although these hints are played for comedic value).

Christie wrote a concluding novel to her Marple series, Sleeping Murder, in 1940. She locked it away in a bank vault so it would be safe should she be killed in The Blitz. The novel was not published until shortly after Christie's death in 1976, some thirty-six years after it was originally written.

While Miss Marple is described as 'an old lady' in many of the stories, her age is never mentioned. Excluding Sleeping Murder, forty-one years passed between the first and last-written novels, and many characters grow and age. An example would be the Vicar's son. At the end of The Murder at the Vicarage, the Vicar's wife is pregnant. In The Mirror Crack'd from Side to Side, it is mentioned that the son is now grown, successful and has a career. The effects of aging are seen on Miss Marple, such as needing a vacation after an illness in A Caribbean Mystery or finding she can no longer knit due to poor eyesight in The Mirror Crack'd from Side to Side.

Miss Marple also appears in "Greenshaw's Folly", a short story included as part of the collection The Adventure of the Christmas Pudding and a Selection of Entrées (1960).

Although popular from her first appearance in 1930, Jane Marple had to wait thirty-two years for her first big-screen appearance. When she made it, the results were found disappointing to Christie purists and Christie herself. Murder, She Said (1962, directed by George Pollock) was the first of four British MGM productions starring Dame Margaret Rutherford, a magnificent comic actress but too boisterous and loud to fit the prim and birdlike character Christie created in her novels. This first film was based on the 1957 novel 4:50 from Paddington (U.S. title, What Mrs. McGillicuddy Saw!), and the changes made in the plot were typical of the series. In the film, Mrs. McGillicuddy does not see anything because there is no Mrs. McGillicuddy. Miss Marple herself sees an apparent murder committed on a train running alongside hers. Likewise, it is Miss Marple herself who poses as a maid to find out the facts of the case, not a young friend of hers who has made a business of it. It is interesting that Joan Hickson played the part of the home help in this film so can claim to have appeared in two Miss Marple series.

The other Rutherford films (all directed by George Pollock) were Murder at the Gallop (1963), based on the 1953 Hercule Poirot novel After the Funeral (In this film, she is identified as Miss JTV Marple, though there were no indication as to what the extra initials might stand for); Murder Most Foul (1964), based on the 1952 Poirot novel Mrs McGinty's Dead; and Murder Ahoy (1964). The last film is not based on any Christie work but displays a few plot elements from They Do It With Mirrors (viz., the ship is used as a reform school for wayward boys and one of the teachers uses them as a crime force), and there is a kind of salute to The Mousetrap. Rutherford also appeared briefly as Miss Marple in the spoof Hercule Poirot adventure The Alphabet Murders (1965).

Rutherford, who was 70 years old when the first film was made, insisted that she wore her own clothes during the filming of the movie, as well as having her real-life husband, Stringer Davis appear alongside her as the character 'Mr. Stringer'. The Rutherford films are frequently repeated on television in Germany, and in that country, Miss Marple is generally identified with Rutherford's quirky portrayal. Each of the Margaret Rutherford "Marples" is wonderfully entertaining, but they simply aren't Christie.

In 1980, Angela Lansbury played Miss Marple in The Mirror Crack'd (EMI, directed by Guy Hamilton), based on Christie's 1962 novel. However, Lansbury is only on screen for a short time, the bulk of the film being taken up with the machinations of an all-star cast that included Elizabeth Taylor, Rock Hudson, Geraldine Chaplin, Tony Curtis, and Kim Novak. Edward Fox appeared as Inspector Craddock, who did Miss Marple's legwork. Lansbury's Marple was a crisp, intelligent woman who moved stiffly and spoke in clipped tones. Unlike most incarnations of Miss Marple, this one smoked cigarettes.

In 1983, Estonian stage and film actress Ita Ever starred in the Russian language film adaptation of Agatha Christie's novel A Pocket Full of Rye (using the Russian edition's translated title, The Secret of the Blackbirds) as the character of Miss Marple.

American stage and screen legend Helen Hayes portrayed Miss Marple in two American made-for-TV movies, both for CBS: A Caribbean Mystery (1983) and Murder with Mirrors (1984). Sue Grafton contributed to the screenplay of the former. Hayes's Marple was benign and chirpy.

The Bengali actress Raakhee played Miss Marple in the 2003 film Shubho Mahurat, the Indian film adaption of The Mirror Crack'd from Side to Side directed by Rituparno Ghosh.

American TV was the setting for the first dramatic portrayal of Miss Marple. Gracie Fields, a legendary British actress, played her in a 1956 episode of Goodyear TV Playhouse based on A Murder Is Announced, the 1950 Christie novel.

In 1970, the character of Miss Marple was portrayed by Inge Langen in a West German television adaptation of The Murder at the Vicarage (Mord im Pfarrhaus).

In September 1977, veteran actress and authoress Dulcie Gray played the Miss Marple character in a stage adaptation of A Murder Is Announced at the Vaudeville Theatre in London, England.

From 1984 to 1992, the BBC adapted all of the original Miss Marple novels as a series titled Miss Marple. Joan Hickson played the lead role. (Coincidentally, Hickson had played a cook in the first film in which Margaret Rutherford played Miss Marple.) These programs, which are actually a set of 12 feature-length TV movies rather than a TV series in the usual sense, followed the plots of the original novels more closely than the previous film and television adaptations had, and Joan Hickson has come to be regarded by many as the definitive Miss Marple (indeed Agatha Christie herself once remarked years earlier that she would like Joan Hickson to play Miss Marple).

Angela Lansbury, after playing Miss Marple in The Mirror Crack'd, went on to star in the TV series Murder, She Wrote as Jessica Fletcher, a mystery novelist who also solves crimes. The character was based in part on Miss Marple and another Christie character, Ariadne Oliver.

Between 2004 and 2013, ITV broadcasted a new series of adaptations of Agatha Christie's books under the title Agatha Christie's Marple, usually referred to as Marple, with Geraldine McEwan in the lead role until her retirement after the third series. She was replaced with actress Julia McKenzie and the show continued on with another three series. The adaptions are notable for changing the plots and characters of the original books (e.g. incorporating lesbian affairs, changing killer identities, re-naming or removing significant characters, and even using stories from other books where Miss Marple didn't originally feature).

BBC Radio 4 dramatised all of the novels from 1993-2001 with June Whitfield as Miss Marple. 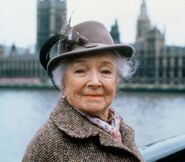