8 January 1989 – 13 November 2013
Agatha Christie's Poirot is a British television drama that aired on ITV from 8 January 1989 to 13 November 2013. David Suchet stars as the eponymous detective, Agatha Christie's fictional Hercule Poirot. Initially produced by LWT, the series was later produced by ITV Studios. In the United States, PBS and A&E have aired it as Poirot.

At the programme's conclusion, which finished with "Curtain", based on the final Poirot novel, every major literary work by Christie that featured the title character had been adapted.

A total of 70 episodes in 13 series were made, beginning with "The Adventure of the Clapham Cook", first aired 8 January 1989 and ending with "Curtain", broadcast on 13 November 2013. Short stories were mostly adapted as 50 minute episodes while novels were made into 100 minute or "feature-length" episodes. The first feature-length episode was "Peril at End House" in Series 2. All of Series 4 and all episodes from Series 6 onwards were feature-length.

Clive Exton in partnership with producer Brian Eastman adapted the pilot. Together, they wrote and produced the first eight series. Exton and Eastman left Poirot after 2001, when they began work on Rosemary & Thyme.

Michele Buck and Damien Timmer, who both went on to form Mammoth Screen, were behind the revamping of the series. The episodes aired from 2003 featured a radical shift in tone from the previous series. The humour of the earlier series was downplayed with each episode being presented as serious drama, and an undercurrent of postmodernism saw the introduction of gritty elements not present in the Christie stories being adapted.

Recurrent motifs in the additions included drug use, sex, abortion, homosexuality, and a tendency toward more visceral imagery. Story changes were often made to present female characters in a more sympathetic or heroic light, at odds with Christie's characteristic gender neutrality. The visual style of later episodes was correspondingly different: particularly, an overall darker tone; and austere modernist or Art Deco locations and decor, widely used earlier in the series, being largely dropped in favour of more lavish settings (epitomised by the re-imagining of Poirot's home as a larger, more lavish apartment).

The series logo was redesigned (the full opening title sequence had not been used since series 6 in 1996), and the main theme motif, though used often, was usually featured subtly and in sombre arrangements; this has been described as a consequence of the novels adapted being darker and more psychologically driven. However, a more upbeat string arrangement of the theme music is used for the end credits of "Hallowe'en Party", "The Clocks" and "Dead Man's Folly".

Series 9–12 lack Hugh Fraser, Philip Jackson and Pauline Moran, who had appeared in the previous series (excepting series 4, where Moran is absent). Series 10 (2006) introduced Zoë Wanamaker as the eccentric crime novelist Ariadne Oliver and David Yelland as Poirot's dependable valet, George — a character that had been introduced in the early Poirot novels, but was left out of the early adaptations in order to develop the character of Miss Lemon. The introduction of Wanamaker and Yelland's characters and the absence of the other characters is generally consistent with the stories on which the scripts were based. Hugh Fraser and David Yelland returned for two episodes of the final series: ("The Big Four" and "Curtain"), with Philip Jackson and Pauline Moran returning for the adaptation of "The Big Four". Zoe Wanamaker also returned for the adaptations of "Elephants Can Remember" and "Dead Man's Folly".

Clive Exton adapted seven novels and fourteen short stories for the series, including "The ABC Murders" and, more controversially, "The Murder of Roger Ackroyd", which received mixed reviews from critics. Anthony Horowitz was another prolific writer for the series, adapting three novels and nine short stories, while Nick Dear adapted six novels. Comedian and novelist Mark Gatiss has written three episodes and also guest-starred in the series, as have Peter Flannery and Kevin Elyot. Ian Hallard, who co-wrote the screenplay for "The Big Four" with his partner Mark Gatiss, appears in the episode and also "Hallowe'en Party", which was scripted by Mark Gatiss alone.

Florin Court in Charterhouse Square, London, was used as Poirot's fictional London residence, Whitehaven Mansions. The final episode to be filmed was "Dead Man's Folly" in June 2013 on the Greenway Estate (which was Agatha Christie's home), broadcast on 30 October 2013.

Suchet was recommended for the part by Christie's family, who had seen him appear as Blott in the TV adaptation of Tom Sharpe's Blott on the Landscape. Suchet said that he prepared for the part by reading all the Poirot novels and every short story, and copying out every piece of description about the character. Suchet told Strand Magazine: "What I did was, I had my file on one side of me and a pile of stories on the other side and day after day, week after week, I ploughed through most of Agatha Christie's novels about Hercule Poirot and wrote down characteristics until I had a file full of documentation of the character. And then it was my business not only to know what he was like, but to gradually become him. I had to become him before we started shooting." During the filming of the first series, Suchet almost left the production during an argument with a director, insisting that Poirot's odd mannerisms (in this case, putting a handkerchief down before sitting on a park bench) be featured.

According to many critics and enthusiasts, Suchet's characterisation is considered to be the most accurate interpretation of all the actors who have played Poirot, and the closest to the character in the books. In 2013, Suchet revealed that Christie's daughter Rosalind Hicks had told him she was sure Christie would have approved of his performance.

In 2007, Suchet spoke of his desire to film the remaining stories in the canon and hoped to achieve this before his 65th birthday in May 2011. Despite speculation of cancellation early in 2011, it was announced on 14 November 2011 that the remaining books would be adapted into a thirteenth series to be filmed in 2012. The remaining books were finally adapted in 2013 into 5 episodes, from which, Curtain, was aired last in 13 November 2013. A 2013 television special, "Being Poirot", centered on Suchet's characterisation and his emotional final episode.

Two Academy Award nominees have appeared in the series: Sarah Miles and Barbara Hershey. Additionally, Jessica Chastain received her first Academy Award nomination the year after her performance in Poirot; Michael Fassbender received his first nomination approximately eight years after appearing on the show. Several members of British thespian families appeared in episodes throughout the course of the series. James Fox appeared as Colonel Race in "Death on the Nile", and his older brother Edward Fox appeared as Gudgeon in "The Hollow". Three of the Cusack sisters each appeared in an episode: Niamh Cusack in "The King of Clubs", Sorcha Cusack in "The Jewel Robbery at the Grand Metropolitan", and Sinéad Cusack in "Dead Man's Folly". David Yelland appeared as Laverton West in "Murder in the Mews" and as George for the remainder of the series from Series 10 onward, and his daughter Hannah Yelland appeared as Geraldine Marsh in "Lord Edgware Dies".

Agatha Christie's grandson Mathew has commented, "Personally, I regret very much that she (Agatha Christie) never saw David Suchet. I think that visually he is much the most convincing and perhaps he manages to convey to the viewer just enough of the irritation that we always associate with the perfectionist, to be convincing!"

More recently, the series has been described by some critics as going "off piste", though not negatively, from its old format. It has been praised for its new writers, more lavish productions and a greater emphasis on the darker psychology of the novels. Significantly, it was noted for "Five Little Pigs" (adapted by Kevin Elyot) bringing out a homosexual subtext of the novel. Nominations for twenty BAFTAs were received between 1989 and 1991 for series 1–3.

In Region 1, Acorn Media has the rights to series 1–6 and 11–12. Series 7–10 are distributed by A&E, a co-producers on several of them. In North America, series 1–11 are available on Netflix and Amazon Prime Instant Streaming service. In Region 4, Acorn Media (distributed by Reel DVD) has begun releasing the series on DVD in Australia in complete season sets. To date, they have released the first 8 series of the show. Series 1–9 and 12 are available in Spain (Region 2) on Blu-ray with Spanish and English audio tracks. Dutch FilmWorks were reported to be the first company to release series 12, in 2010.

Beginning in 2011, Acorn began issuing the series on Blu-ray discs. As of 4 November 2014, series 1 through 13 have all been issued on DVD and Blu-ray by Acorn. The A&E DVD releases of series 7 through 10 corresponded to the A&E versions broadcast in America which were missing sections of the original video as originally broadcast in the United Kingdom. The Acorn releases of series 7 through 10 restore the missing video.

Being Poirot is a 50-minute television programme in which David Suchet attempts to unravel the mysterious appeal of Hercule Poirot and how he portrayed him. It was broadcast in the United Kingdom on the same evening as the final episode "Curtain".

Suchet visited Greenway, Agatha Christie's summer home, recollecting how he met her daughter Rosalind and her husband Anthony Hicks for their approval before he began filming. He now meets Christie's grandson Mathew Pritchard who recounts how his grandmother found the character amongst Belgian refugees in Torquay. A visit to the permanent Poirot exhibition at Torquay Museum to which he presented the cane he used in the television series.

Suchet acknowledged the first stage and film adaptations of the books with actors such as Charles Laughton on the London stage in "Alibi", an adaptation of The Murder of Roger Ackroyd, in 1928. Alibi was filmed in 1931 with Austin Trevor but is now lost. The oldest surviving film portrayal from 1934 was "Lord Edgware Dies" again with Austin Trevor portraying Poirot. Suchet notes a conscious decision was made by the film company to portray Poirot without a moustache. Films featuring Albert Finney and Peter Ustinov were also featured and Suchet reveals he read the books and wrote down 93 notes of the character that he would use in his portrayal and for him it was discovering the voice he would use and the rapid mincing gait featured in the books.

Suchet also goes to Florin Court, a place that the production company found to represent his home Whitehaven Mansions. There he meets first producer Brian Eastman, with whom he discusses the set that was built based on the flats and Eastman's decision to fix the stories in 1936. Suchet also visits composer Christopher Gunning who had composed four themes for Eastman, the first being Gunning's favourite. Eastman chose the fourth after having Gunning darken the tone.

Suchet travels to Brussels, where he is feted by the police chief and mayor. He then goes to Ellezelles which claims to be the birthplace of Poirot and is shown a birth certificate as proof. It says the date was 1 April, "fools day" (no year mentioned). Finally, Suchet travels on the Orient Express and recounts filming the episode "Dead Man's Folly" last at Greenway to finish on a high note. 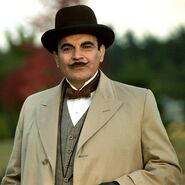 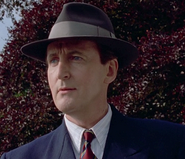